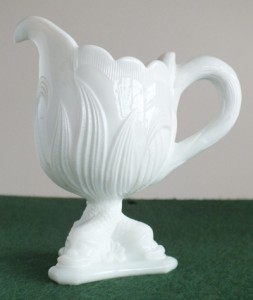 Heppell glass started when William Henry Heppell took over the firm around the middle of the nineteenth century, which had existed from around the beginning of the century. Starting in 1874 he registered twelve designs over the next ten years.

The ad also says “The special attention of buyers in called to our cut and engraved moons”. though I’m not yet sure what this means! Their banner states they produce “Blown, pressed, flint, opal & Marble glass” so they had a wide repertoire.

Perhaps this glasshouse is a more utilitarian producer, concentrating on industrial wares as the mainstay of their business, with “fancy glass” taking a smaller part. This would help explain the small number of designs registered and the limited, if interesting, designs they did produce.

Heppell glass is interesting from a collector’s point of view for a range of unusual and quirky designs which they produced. Some of these designs were good but some were less successful. 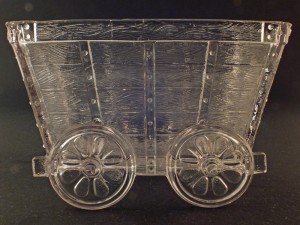 This design was registered by Heppell on the 24th November 1882 and is featured on page 108 of Colin Lattimore’s book “English 19th Century Press-Moulded Glass“. On checking “The Identification of English Pressed Glass” the design registered on the above date has the words (Dolphin series) on the same line so the pictured piece is likely to be this dolphin design.

In late 1884 Heppell glass decided to stop trading and George Davidson bought the moulds and patterns and produced some of them, including them in their catalogue.