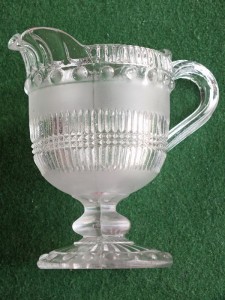 This Henry Greener piece is the second of the three jugs with manufacturer’s marks that I recently bought for a very small amount at a local antiques fair. It’s a very nice shape and has a great first Greener mark on the inside and very clear. I’ve put this picture and two more, one of the mark, in the gallery. 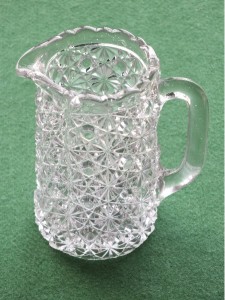 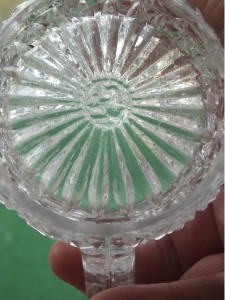 One of the really nice things about having a site dedicated to a particular subject is that people email me with comments and questions about their glass.

Some questions are easy to answer, especially when the maker’s mark or registration marks are present.

Others however are much more difficult, reminding me of the vast production of English glasshouses alone in the latter part of the Nineteenth Century, quite apart from the rest of the world.

Most production was not marked in any way and many typically copied designs of other manufacturers.

I’m always happy to help in any way I can, although I can’t value any pieces any further than looking at what current prices might be on Ebay.

Things that help me to identify pieces are:

I have a number of books but by no means enough to form a comprehensive library of pressed glass. So I’m always on the lookout for good reference books and for pattern books from the 1800s. There must be some hiding somewhere. 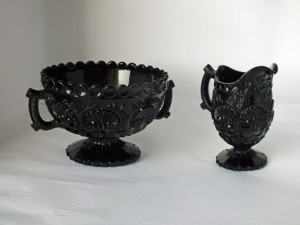 I’m always excited when I’m waiting for a new piece of pressed glass in the post. I’ve been waiting for a few days now. These days I find most of what I buy on eBay.

The post guy brings me the parcel this morning and I was keen to get the package open to see what my purchase was like.

Well packaged that’s what. This is always good especially with antique glass.

Then the two pieces of vintage glass themselves, dark black and shiny. They’re a bit smaller than I expected, I mustn’t have checked the dimensions. But I have no problems with that as they are both fine pieces.

Many pressed glass pieces were useful but not visually interesting. Yet some were very attractive and some I think were a form of art. These are beautiful, sharp and with a marine inspired pattern.

You can see from the pic they are a sugar bowl and cream jug in jet glass. The moulding of shells and coral are crisp and parts of the pieces are quite sharp. On careful inspection I can’t find any damage.

So where were they made? There are no maker’s marks or registration marks or numbers but the pattern is close to another marked piece I have. That’s a blue and white vitroporcelain spill vase by Davidson of Gateshead in North-East England. It has the lion rising from a mural crown inside the base. And the design on the spill vase is almost identical to that of my new pieces.

So I reckon it’s pretty safe to attribute this to the Davidson pressed glass factory as the design is so like a confirmed piece from those works. The date of manufacture is likely to be in the 1880s or 1890s.

I’m pleased with my new acquisitions. They’re in perfect condition and great examples of Davidson pressed glass from North-East England in the later part of the 19th Century.

Boot sales. Charity Shops. Bric-a-brac stores. These used to be great places to buy pressed glass. Surprises were relatively common and I built up my collection by going in to every one of these shops or sales whenever I came across one.

Not any more. I rarely find anything of interest in these places now. The easy access to images and descriptions of any type of antique or book makes it simple for anyone to check on what they have. So people are more aware and my specialist knowledge of pressed glass is worth less in finding bargains.

So how do I decide what to buy? Most of us have limited funds and/or time to devote to a hobby such as collecting antique glass so we have to be focussed.

Here’s my 5 minute or less look at a pressed glass Davidson sugar and cream jug from the North-East of England in jet glass.

This pattern is number 126 in the Davidson catalogue of about 1885 so although it is unmarked we can attribute it to this glassworks.

The pattern was a popular one and is found on a large number of articles from this time. It consists of patriotic symbols of the United Kingdom: the rose of England, the ostrich feathers of the Prince of Wales and the thistles of Scotland. Whether the Kingdom will stay United is not yet clear this 9th September 2014.

The colour is a deep black jet glass, named after the gemstone found commonly in the North-East of England. The moulding is crisp, especially on the jug which feels sharp in places.

This Davidson sugar and cream would have been affordable for many people in later Victorian times who would have been unable to afford any glass objects in the first half of the 19th Century. The coming of machine pressed glass allowed a man to make many hundreds of the same item every day which dramatically reduced the costs to the customers.

Pressed glass manufacturers produced a large range of ordinary items such as lamps for gas lights and light covers for trains. They also made normal day to day domestic objects and in some cases more artistic pieces.

A very large number of people were able to buy useful and in some cases beautiful domestic wares such as this Davidson sugar and cream.

I haven’t posted much for a while so I thought I’d take some videos of pieces in my collection as we rarely get a really good look at a piece when we see pictures of glass online.

Of all the manufacturers I think I like Davidson pressed glass the best, there’s something about the designs and the colours which just resonates with me. This little pressed glass spill vase is one of my favourites. Its blue colour is so vivid and the design so well executed that the mould maker must have been very skilled indeed. I’m not aware of any old moulds which have survived but it would be very interesting to find one.

I will be doing a series of “Tiny Glass Videos” which I reckon will be all under 10 mins at most and you’ll have to excuse my not very professional video abilities. However, I will improve.

This is the first video and the transcript is available on YouTube or on my Davidson Pressed Glass Spill Vase page.

I hope it’s of interest and please let me have any comments.

The art glass and antiques market goes up and down as we all know. I’ve bought pieces and books for prices that seemed expensive some years later once prices had dropped!

So much of the pressed glass market may have reduced in price over the last few years, lowering the value of our collections but also giving us opportunities to collect more pieces for a reasonable outlay.

However if you have an especially nice piece of glass with an interesting provenance it is still possible that it has maintained or even increased its value over the years. As in many areas, real quality shines through.

Perhaps this is the lesson. Be discerning and make sure you buy an undamaged, great piece which you love. It’s the best way to find something you’ll be happy with for a long time and will also have the best possibility of increasing in value over time.

Read “Art glass keeps value despite poor market” for more detail on this from the US pressed glass market.

Many of us will have come across Apsley Pellat’s book “Curiosities of glass making with details of the processes and productions of ancient and modern ornamental glass manufacture” , published in 1849. He covers a wide range of glass making techniques and methods and pressed glass accounts for only a small part of his coverage.

However, it is interesting to see what he wrote because he published his book quite close to the time that the techniques of pressed glass were invented, in the 1830s in the United States.