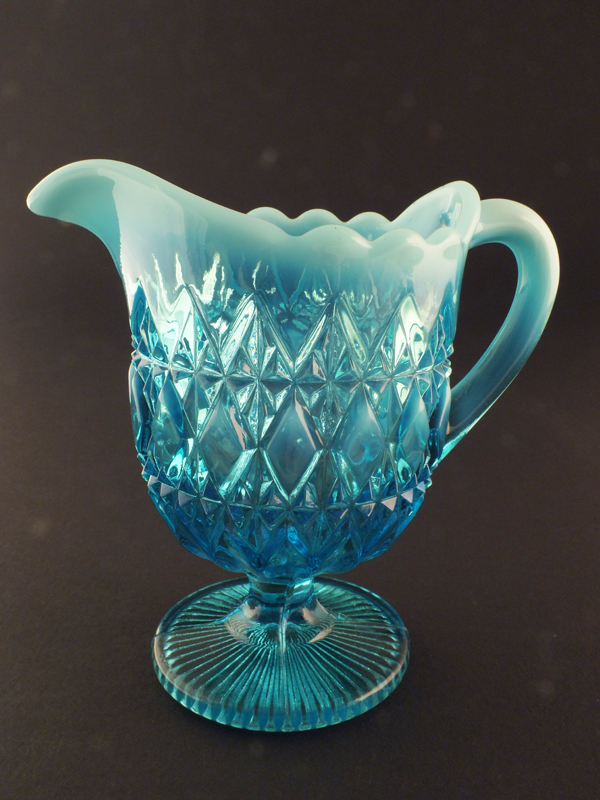 I think Davidson glass is my favourite of all the Victorian pressed glass manufacturers. There are many beautiful items from Sowerby glass, Greener glass and Derbyshire glass it is true. However, the small clear pressed jugs of Davidson glass have a wonderful design and are so perfect for their function.

George Davidson (1822-1891) founded his firm in 1867 in the Teams area of Gateshead which lies on the south side of the Tyne from Newcastle-Upon-Tyne in North East England. He seems to have been a real character in the area, being a butcher for many years, an accomplished and in demand singer, a raconteur, a Liberal councillor and finally Lord Mayor of Gateshead from 1886 to 1888.

The Tyne was an ideal situation for heavy industry such as shipbuilding and glass making due to the accessible transport on the River Tyne and the easy availability of coal for fuel. Several glass firms were sited in the north-east due to these factors which helped industry.

In the 1840s Sowerby started to produce pressed glass in Gateshead on the Tyne and began the process which allowed the middle and lower classes access to glass objects. Previously only richer people could afford the cut or blown glass from Stourbridge and Ireland.

George Davidson was energetic and very enthusiastic about this new and very profitable industrial enterprise. By all accounts he was a very sympathetic and capable man for by 1890 he had 350 men in his employment and glass production was running at 200 to 250 tons per month.

Decorative and domestic glass was not the initial focus of many production efforts. The paraffin lamp was the new standard for domestic lighting and was greatly improved by fitting a glass chimney to the lamp. This limited the flame and reduced the amount of smoke produced. Davidson glass produced large numbers of these chimneys and they were a commercial success.

Chimneys became less profitable gradually and by 1877 he had concentrated on producing pressed glass ware. Much was exported to Australia to his brother Joseph’s business. Joseph exporting foodstuffs and other items  in return back to England.

Although much Davidson glass is not marked, they did use a trade mark for goods made between 1880 and 1890. It is the upper half of a lion rising from a crown made up of bricks – “demi lion emerging from a mural crown”. 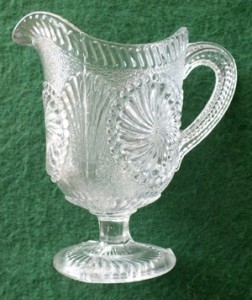 Most of the processing and warehousing departments were destroyed by fire in January 1881 but they recovered and were back in business the same year.

Around this time production from the factory included a much wider variety of glassware and included vitroporcelain with a wide range of colours. They acquired the moulds of the firm of W.H. Heppell & Co. of Newcastle which had ceased trading, and some of the designs of these moulds were to prove particularly interesting.

Davidson’s copied from Sowerby the glass colour known as Malachite, like the marbled stone, formed by mixing purple glass with white glass. This type of colour is often referred to as “slag glass” as it was thought that the slag from the furnace was used to make this glass, but this was not the case.

Two catalogues of Davidson’s glassware have come down to us so we know that around 1884 to 1885 they were producing a huge variety of domestic glassware to service the demands of the increasing middle class who had set up home and desired many items on their domestic list.

Success for many firms depended on introducing new designs and in November 1885 Davidson’s introduced their Hobnail suite which is best illustrated by a picture. In 1889 they introduced the well known and now sought after Pearline glass, in yellow (primrose) and blue. Pearline is a favourite with collectors today and commands good prices. Primrose is yellow by addition of small amounts of uranium and is sometimes called uranium glass. Uranium glass flouresces green under ultraviolet light. The last type of this kind of glass was “Moonshine” which was almost clear with a white opaqueness added in the same was as blue and yellow pearline.

Pearline glass made up much of their production in the 1890s and was very successful indeed and the firm continued. In 1910 they produced the flower dome which is still seen moderately often today.

Thomas Davidson (1860-1937) took over on the death of his father and became the manager of the glass works. He was skilled at glass working from his time in the glass works and was closely involved in the design and manufacture of Davidson’s articles around the turn of the century.

Thomas Davidson oversaw the modernisation of the glassworks and installation of new furnaces powered by oil, gas and eventually electricity. The productivity and product range of the factory increased significantly in the 1920s as did its numbers of employees.

He was one of those rare individuals who understood the threat which foreign companies posed if the north-eastern glass factories were to prosper in the future. He knew that tastes would change and Davidson’s had to change with it. He showed great ingenuity in the design and planning of new products so that it would minimise production costs and allow flexibility in making new combinations quickly.

Cloud glass was one of Thomas Davidson’s innovations, introduced in 1923 and continually manufactured until the Second War. After the war they did not produce this type of glass further but instead released stocks during the decade of the 1950s.

Cloud glass was produced by adding trails of molten darker glass to lighter glass already set in a mould then bringing the plunger down to make the object. The swirling, rather random trails of coloured glass in a lighter ground is familiar to all glass collectors.

A red kind of cloud glass was introduced in 1929 and lastly in 1934 a different orange colour was produced. These last two colours weren’t as popular but as often with these things, these very colours are now highly sought after. Several other much rarer colour combinations were also produced and a very large number of designs, leading to a large number of potentially interesting combinations for collectors.

You will notice when you look at cloud glass that it has a matt surface, achieved by acid etching for a satiny surface which adds to its attractiveness and cloud-like nature. Personally I’m not fond of cloud glass so I don’t expect you will get any pics unless I find somebody else’s pieces!

Foreign competition from western European countries, Czechoslovakia and the USA was always present and a threat to the north-east glassmakers. In the coal strike of 1926 the factories were all on short time working which was an own goal from English producers point of view.

Davidson’s advertising was aimed at the woman as homemaker, encouraging her to buy beautiful items to make her home complete, and this and other companies offered a very long list of “necessary” items.

Chippendale glass was designed and patented in the USA in the early years of the 20th Century and imported into Britain. The moulds were purchased by a Charles Pratt and Davidson used them to produce this range of glassware.

Davidson’s bought the exclusive rights to manufacture Chippendale glass when they found out that it was very popular and produced some lines in colour. The names “Jacobean” and “Georgian”were given to ranges of Chippendale glass but these were just names rather than referring to the historical periods.

Personally I can’t see any aesthetic beauty in Chippendale glass so leave it well alone.

All glassworks functioned with a number of “shops” which were based around a press, doing different activities. So the “unmelted shop” dealt with the items which came off the press and did not need any further work to complete them. So they were annealed, cooled and packed.

In the “melted shop” the products needed further work, perhaps to smooth their surfaces, produce the pearline effect or to bend the item into a position that was not possible from the mould alone. Shops worked 24 hours a day but main shifts were six until two and two until ten. Presumably the furnaces had to be kept lit during the night anyhow so production at that time made good sense.

Thomas Davidson died in 1937 and his nephew Claude Fraser, who was not a glass maker, took over. He coped with the stopping of all decorative glass production in World War 2 and the changeover to producing glass for the military effort. Restrictions on decorative glass, presumably due to rationing, continued for some time after the war and it was not until the 1950s that Davidson’s were able to produce their well known ranges again.

Davidson’s continued to make industrial glass for lighting and laboratory work and adjusted their decorative output to fit the new fashion for more organic pieces, led by Scandinavian designers.

Claude Fraser died in 1959 and after some upheavals it was eventually taken over by one of its customers, Abrahams, who were a firm specialising in electroplating in Birmingham. Know as Abrahams and Co, the firm made workforce cuts and changes to procedures, giving them some success until they found competion from foreign firms hard. The firm closed in 1987.