This is the transcription of one of my Tiny Glass Videos, with me Jonnie, looking at pieces from my collection. This is a lovely little piece, a Davidson glass spill vase or posy holder in a gorgeous colour.

This piece is 9.75cm high and 6.5 to 7cm diameter as it’s a bit off circular, weighing 193g or 6.8 ounces. It feels nice and heavy in the hand. It’s a good, neat, well proportioned shape with three small feet and on very careful inspection can be seen to have come from a three-piece mould. The mould lines are very hard to see, indicating a high quality, well fitting mould.

Colours like this are often referred to as slag glass, or malachite (tho that is strictly speaking green and white like the rock) but I think the official description for this colour is blue vitro-porcelain. Vitro-porcelain because it looks like china or porcelain at a glance but is actually glass. It is a beautiful colour. The clever Victorian glass chemists added various minerals to make this lovely swirling pattern of intense blue and white. If we look at the piece carefully we can see a couple of aspects which indicate it’s not a modern piece. The colour is not mixed thoroughly throughout the piece, there are areas of clear glass, one on the foot and one on the rim. There is also a bump on the side of the rim. These little faults, along with inclusions within the glass, give a clue that a piece is not modern when such faults rarely if ever occur.

It’s a marine inspired pattern. The main features are the stylised scallop shells and in-between and overarching them are seaweed fronds. Above is a ring of I’m not quite sure what, they could be crustacean tails such as prawns, or perhaps are meant to be plantlike. The ground is detailed like a layer of worms but could represent sand. The bottom is concentric circles and even the rim has a gentle raised pattern I can feel rather than see. The thing that really strikes me when handling this piece is how sharp it is. For a pressed vase from a mould it is very well defined. The edges of the shell are sharp, the seaweeds are roughly and evenly patterned. Someone put a lot of skilled work into making this mould, I wonder who that was. 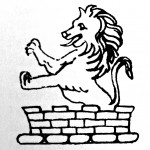 The trademark on this piece indicates it was made by George Davidson & Co of Gateshead in the North East of England, UK. Inside the piece on the bottom is the trademark which is a lion rising from a mural or walled crown. This mark was used from 1880 to 1890 so that dates the piece to that decade.

This is a late victorian pressed glass Davidson spill vase in blue vitro porcelain. But that really doesn’t describe how beautiful it is, a really lovely and highly skilfully produced little piece from the north east of England in the heyday of Victorian production. I love it.